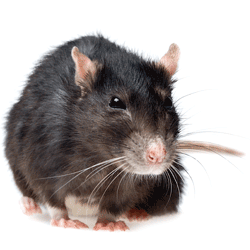 Primarily a nocturnal animal, the rat is a much larger rodent than the mouse. If you have encountered a rat they generally they are simply trying to find food and will scurry away when frightened by movement or activity. However, some may be aggressive and if you find evidence of rat activity near or in your home, you should exterminate immediately.

The most common rats humans encounter are the Norway rat, the black rat, the brown rat and the roof rat. Bigger than mice, these rodents can be extremely destructive. These commensal (living in close contact with man) rodents carry diseases and allergens that impact humans. Like mice, their constant gnawing causes damage to structures as well as wiring and they are responsible for many fires each year.

Rats often build tunnels on river banks, along sidewalks and under foundations.  They can move inside through openings as small as a quarter and will make nests in appliances, wall voids, and attics. They are often discovered when holes are observed or large droppings are left behind on counters, floors and in pantries. When cornered, rats can be aggressive and should be avoided.