Home > Something new to worry about?

Something new to worry about? 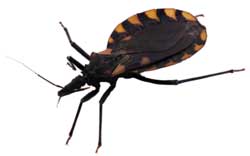 I’ve noticed several stories in the news recently about Kissing Bugs. They sound pretty cute but can cause big problems. This insect bites your face when you’re sleeping – and somebody thought, “I know, let’s call it a kissing bug”!

It makes you wonder about their sleeping arrangements.
Kissing bugs have been found in the lower 2/3 of the United States as well as throughout out the Caribbean, Mexico, Central and South America. They are easily mistaken for many other harmless insects and most of the time you never see them anyway – because you are asleep. Here’s why they’re a problem.

As with most insects, kissing bugs poop a LOT. Everywhere they go. So after they bite you, sometimes they leave a little “extra” behind. When you wake up, you feel the bite and rub your cheek or eyes and the poop gets in there, too. Yuck…I know. And this is where the trouble starts. If the bug was carrying a parasite it can transmit Chagas Disease to you. The initial symptoms are flu-like and most people don’t associate the bite with the symptoms. In most cases, Chagas goes into remission and there are no problems. But for about a third of the people infected, Chagas can cause serious heart and digestive issues, and even death, if not treated. So it’s no joke.

If you travel much it is possible that you could become a victim. It is common enough that when people donate blood this is one of the things they screen for before that blood donation is made available to hospitals. And this is usually how most Americans find out they have the disease.

Personally, I wouldn’t let this keep me from traveling. But it is one more thing to be aware of when deciding where to stay. Just like at home, I recommend that structures have screens, are tidy and don’t have uncontrolled vegetation growing up around the building. A little pest control is a good idea, too. If conditions aren’t friendly for pests your chances of exposure are much less.

And now you know the Rest of the story.